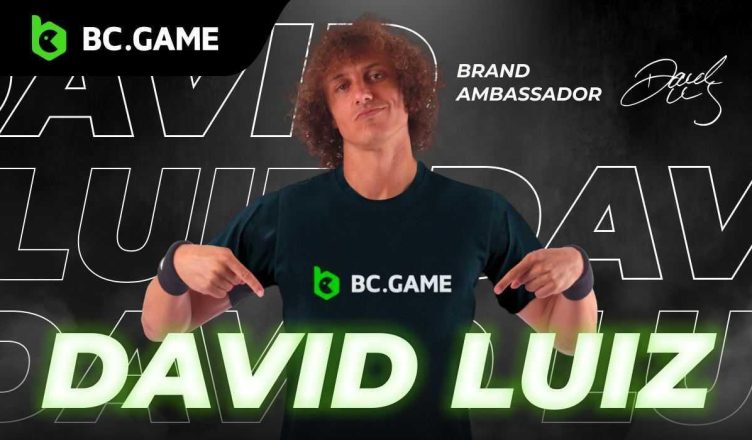 One of the most promising football players in Brazil joins BC.GAME as its newest ambassador. Both are big names in their respective industries, and their future collaborations are expected to benefit football fans and sports betting enthusiasts.

Sports betting is the newest addition to BC.GAME’s growing gaming portfolio. It also happens to be the favorite gambling activity of Brazilians. With David Luiz’s partnership with the crypto gambling platform, their audience reach is expected to widen.

Luiz shares his perspective on the new partnership, “I’m very, very happy to be partnering with BC.GAME and very excited for the collaboration coming soon.”

David Luiz’s presence can be seen on different social media platforms where he will be conducting engaging activities with BC.GAME players and football fans. The partnership between BC.GAME and Luiz will attract more people to adopt cryptocurrency and try iGaming.

Over the past years, the number of Brazilian players engaged in online casinos has grown significantly. The integration of cryptocurrency and blockchain technology made it even more interesting to online gamblers.

David Luiz Marinho is a professional football player in Brazil. He is a member of the Flamengo Rowing Club, one of Brazil’s most established sports clubs based in Rio de Janeiro. He is primarily positioned as a center-back but can also play the role of a defensive midfielder.

He has received several individual recognitions in football. This includes LPFP Primeira Liga Player of the Year in 09-10, FIFA Club World Cup Silver Ball in 2012, two FA Cups, and a FIFA Confederations Cup title in his time with Brazil.

With all these recognitions, no wonder BC.GAME partnered with Luiz for the crypto gambling platform’s expansion in Brazil.

Aside from its partnership with Luiz, BC.GAME initially entered partnerships with the Argentine Football Association and Cloud9. The crypto gambling platform continues to offer classic casino games, live casino tables, and sports betting activities. It also received several awards, including the 2022 Crypto Casino of the Year from Sigma Awards.